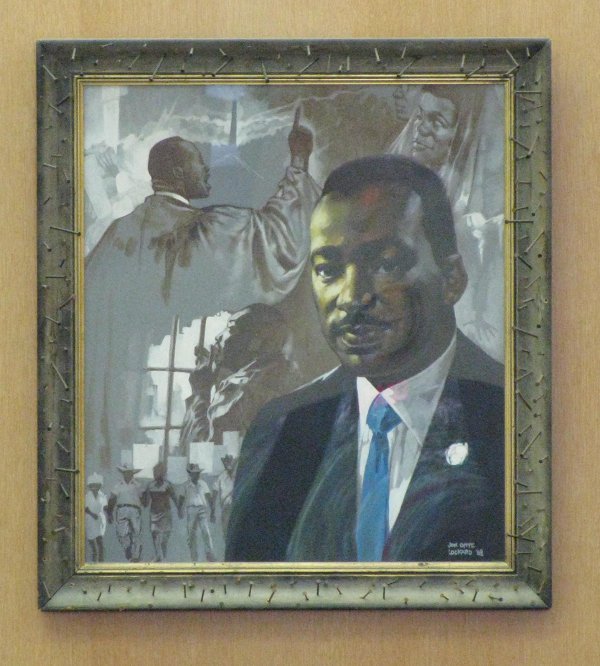 The Orchard Ridge Campus King Library displays a portrait, a vibrant montage of Martin Luther King Jr.’s life. Look up towards the balcony as you enter the Library’s eastern doors to view it. The painting was acquired in October 1968, when the new OR Campus Library opened and was named the Martin Luther King Jr. Learning Resource Center. At the dedication ceremony Congressman John Conyers, Jr. read a message on behalf of Coretta Scott King. The portrait, created by Ann Arbor artist Jon Onye Lockard, was given in honor of the event.1

The Portrait and the Artist

Images from the life of Dr. King and the struggle for civil rights in the portrait are surrounded by a frame embedded with large nails. According to the artist, the nails evoke pain, torture, and crucifixion. An artist and educator for more than 50 years, Jon Onye Lockard was a Lecturer in Afroamerican and African Studies at the University of Michigan. Jon Lockard was a primary consultant for The Martin Luther King Jr. National Memorial Project. The memorial, unveiled in August, 2011 on the National Mall in Washington, D.C., is a 30-foot sculpture of Dr. King in a “Stone of Hope”. Prof. Lockard advised the sculptor Lei Yixin and was on the Council of Historians who selected the words of Dr. King engraved on the memorial.

The memorial has three major themes – Hope, Democracy, and Love. When asked about the love theme, Prof. Lockard replied, “Love is the interconnectedness between individuals, between communities, between ethnic and religious groups, and between nations. It is ONENESS! Until these concepts are reinforced from families to families, societies to societies, nations to nations; world leadership has a tremendous amount of work yet to do.”2